A week ago Tuesday we played a game based on a fictitious river in China during the late 1800's. The game had a British flotilla made up of a powerful gunboat and steam launches sailing up river to rescue the British commissioner, his family, a missionary, his wife and a Chinese official who are besieged by the local Chinese warlord and his pirate allies.
The warlord and pirates needed to capture all or any of the officials to hold them for ransom.
In addition to these adversaries there was a fort on the river occupied by Imperial troops who could be swayed to join the warlord if they could be bribed. This would be rolled for each turn with a 1 getting the troops and their gun to join the warlord and pirates.
And here we have the pictures that are worth a thousand words.

The pirates at start. 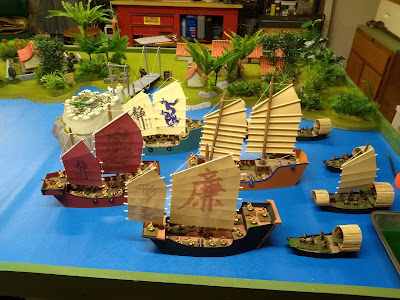 The British rescue force at the start. 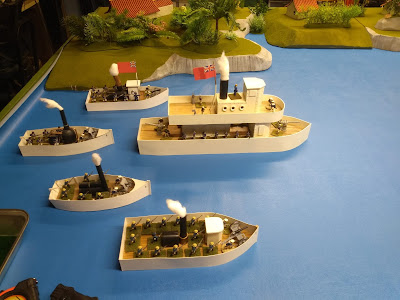 A look up river from the British side. 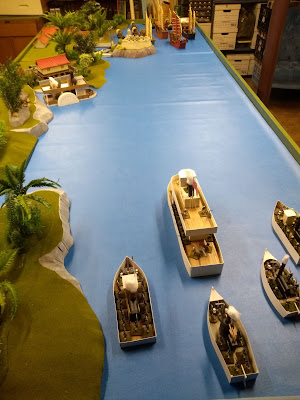 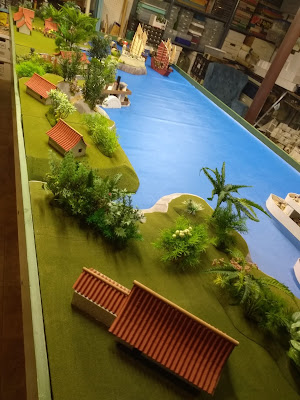 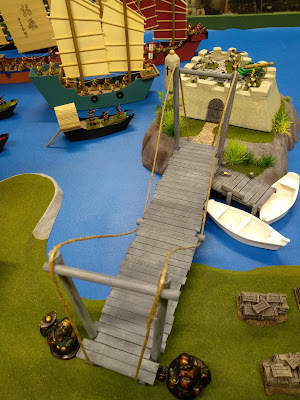 The British officials residence guarded by a detachment of Indian troops. Also in attendance are his family, the missionaries, and the Chinese official. 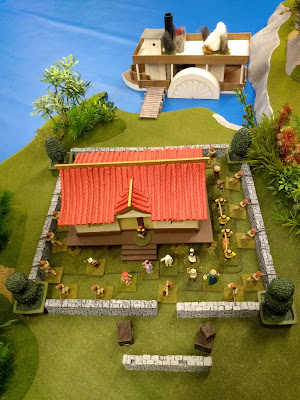 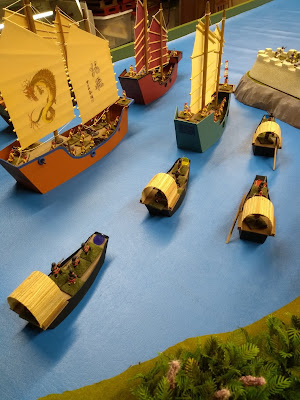 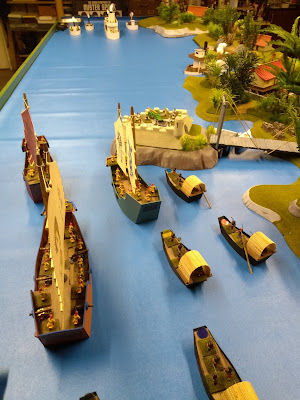 The pirates sail down river to stop the flotilla. 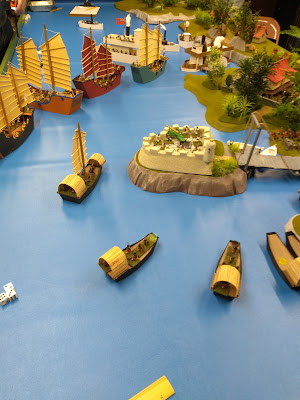 Here we see the warlord trying to assault the residence. 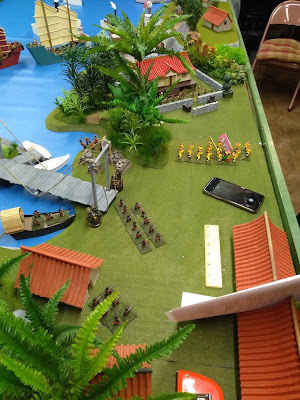 This picture shows a side wheel river boat that had been set on fire during the night before the British civilians could board and set sail. also in the center the pirates have started to board the large British gun boat. Steam launches are landing to assist the civilians. 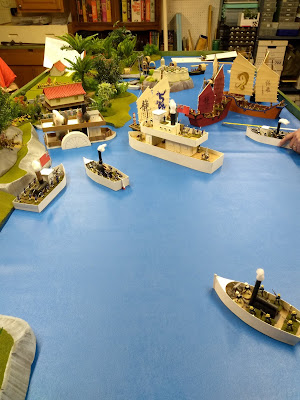 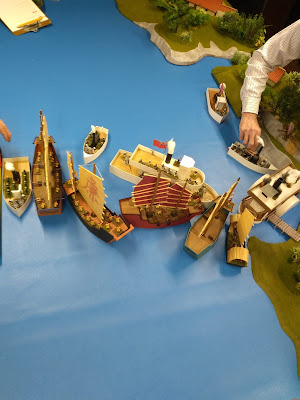 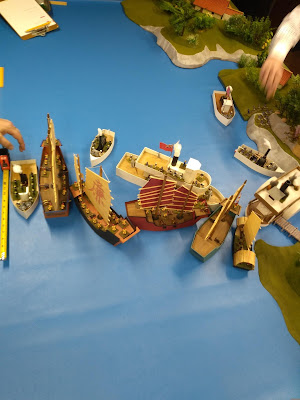 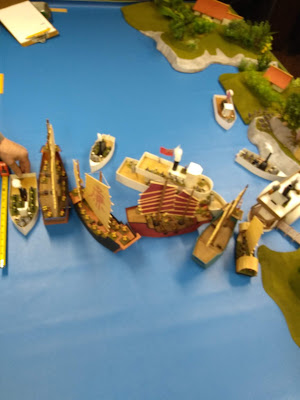 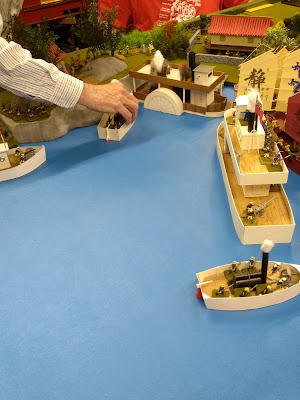 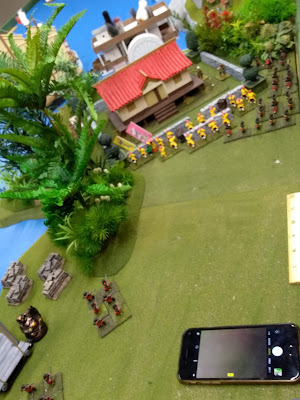 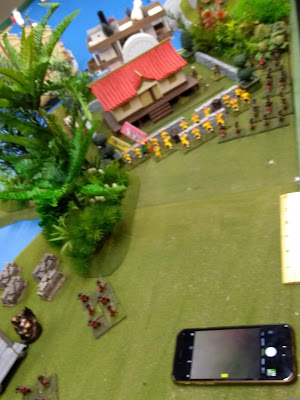 The British civilians have abandoned the residence while the East Indian troops hold the warlord's troops at bay. 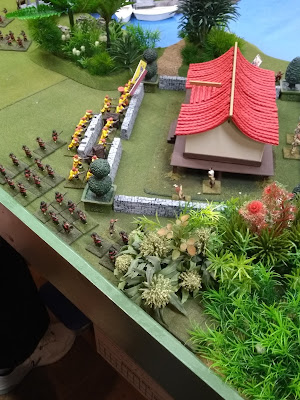 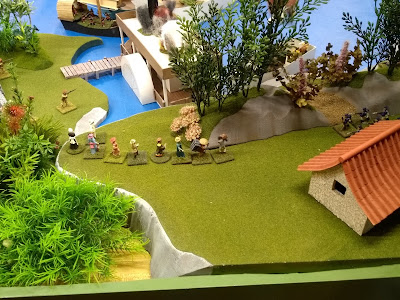 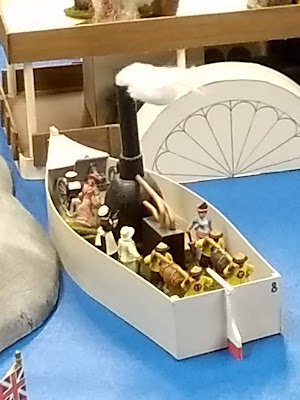 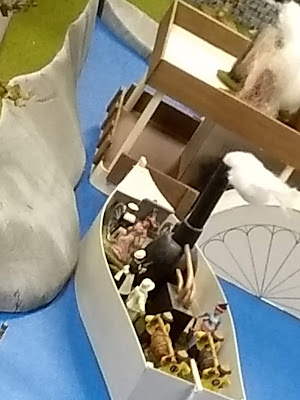 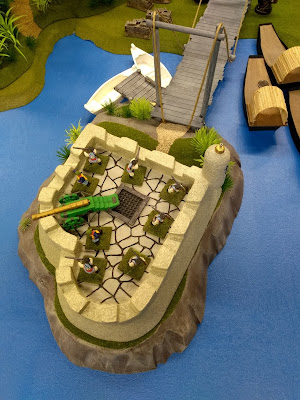 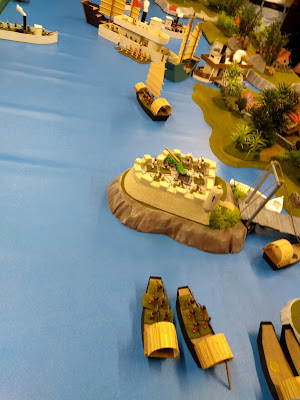 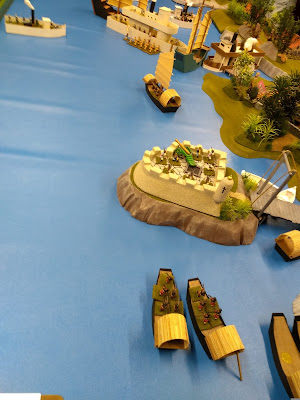 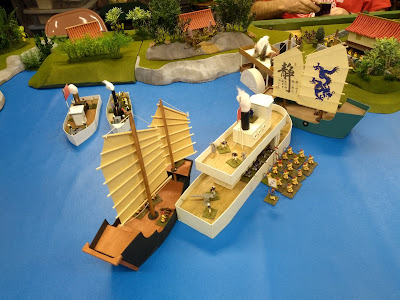 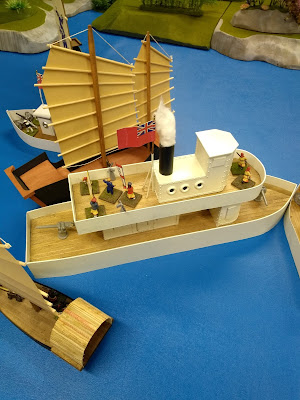 The civilians sail off to freedom. 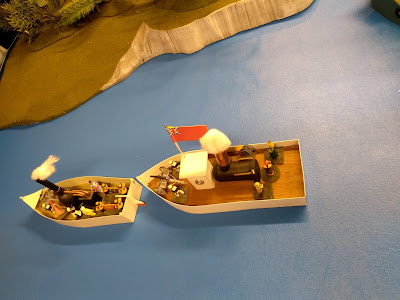 We had four gamers on this occasion. Tom, Wendell, Bill and myself.
Bill and Wendell were the British while Tom and I were the warlord and pirates.
The game ended with mixed results as the British were able to rescue the civilians but did lose the large gun boat in the process.
It was a fun game with a lot of action.
Take care and good gaming,
Greg
Posted by Greg Prince at 1:45 PM

Email ThisBlogThis!Share to TwitterShare to FacebookShare to Pinterest
Labels: Colonial

Greg Prince
Mid West, United States
I am an aging gamer who got his start while playing with plastic figures in the 50's as a child. With the help of his parents and brothers, this experience grew and transformed into formal gaming. Starting with my first board game, Avalon Hill's Africa Corps and following a progression through Dungeons and Dragons into historical miniatures. Currently gaming with close friends in the following periods of history, Ancient, Dark Ages, SYW, Pirates, FIW, AWI, American Civil War, Colonial Wars, Boxer Rebelion, WWI and WWII. I tend to support the underdog and look to see if I can 'change history' through our games. Beat the odds so to say. But loosing in a great game to your friends is better than winning at all costs. It is just a game and unlike the real world, no one will live or die on the results of our games. I have a deep respect for people of all nations and religious beliefs. Any comments and or references made in this blog will be made in the context of the period of history as relevant to the game being discussed and not as a derogitory remark. May the dice roll to your advantage. Greg